Narrative thinking occurs when the brain is in default mode and not task-focused. It is a particular frame of mind that leads one towards thinking or telling stories that have flow, connection, tension and satisfaction. We often default to narrative thinking when the process of acquiring knowledge and understanding through thought, experience and senses is not driven by a specific task. Professor Martin Anthony Conway, Head of the Psychology Department, City University London, who is known for his pioneering theoretical work on autobiographical memory (AM) as well as neuropsychology of memory, says that narrative thinking is meaningful, coherent, emotional and has a certain perspective. It features autobiographical remembering, future thinking and self-fictionalisation.

In the second installment of The Sir John Monash lecture series, Prof Conway spoke on three major areas - the self-memory system (SMS), the default/core network, and narrative thinking and fictionalising tendencies. He shared that when a memory is constructed, brain imaging studies show that areas of the frontal lobes and more posterior brain areas become active over the course of memory construction.

The default or core network is a complex network distributed through the neocortex and limbic system hubs. The default network is active when attention is not task-focused as in the resting state control conditions used in early neuroimaging studies. 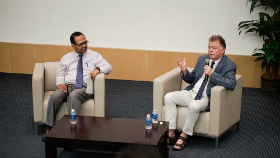 “What do we do when we are not task-focused? Daydream! Daydreaming involves memory constructions, future plans, and reflections on the past,” stated Prof Conway. He suggested that when we are in default mode, we are engaging in narrative thinking and creating coherent, meaningful, evaluative and emotional mental representations. These will include conceptual autobiographical knowledge (general events), some episodic memories, some memories of future events (plans) as well as imaginings of how the past might have been (wishes).

While narratively thinking, we oscillate between internal and external perspectives creating narratives that have both experiential, wishful and critical aspects to them. Sometimes, these narratives become memories or are experienced as memories. Perhaps because they are generated in the same brain networks as actual memories, they can more easily become part of long term knowledge.

“The purpose of narrative thinking is to maintain a dynamic self-system. Maintenance of this complex self-system takes place when attention is not task-focused. It is the default task of cognitive processing. One implication of this view is that if the capacity for narrative thinking is disrupted or impaired, then there will be changes in conscious thought when cognition is not task focused,” said Prof Conway, adding that in patients who reported no ‘daydreaming’, their consciousness was ‘blank’ between tasks. 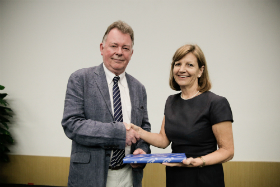 He presented case studies with fictional childhood memories and took on a more lighthearted theme with a few observations of the fictional memories of politicians. “Politicians are a group in which false memories and other fictions are often prominent,” said Prof Conway. He recounted Reagan’s emotional memory of presenting a medal to a WWII soldier, which was in fact from the film ‘A Wing and A Prayer’.

False or fictional biographical memories often support what we might term the ‘self-narrative’, a part of the self memory system. They are generated in the same brain networks as AMs and in this respect they are not unlike ‘true’ AMs. They allow us to have consistent and meaningful, i.e. coherent relationship with the past and the future - even if some or all of the narrative is fictional.

The talk was organised by Monash University Malaysia as part of the Sir John Monash Lecture, in partnership with the Jeffrey Cheah Distinguished Speakers Series. The Sir John Monash Lectures engages high-profile thought leaders in the spheres of policy-making, corporate and academia to address key issues pertinent to stakeholders around the region.