Will it be us or nuclear weapons?

Nuclear weapons pose the greatest acute and existential danger to humanity. Yet, rather than disarming, all nuclear-armed states are investing in modernising their arsenals. The danger of nuclear war is growing. Nuclear winter and nuclear famine following a nuclear war would be worldwide and catastrophic – and the only cure is prevention.

In the first Sir John Monash Lecture for 2019, Associate Professor Dr Tilman Ruff discusses the consequences and growing dangers of nuclear war, and the race against time to end nuclear weapons in his lecture on “The humanitarian imperative to eradicate nuclear weapons”.

“We are not used to thinking about it, but nuclear weapons are the most acute threat to our global climate. Nuclear weapons are extraordinarily efficient at igniting simultaneous fires over very large areas. The bomb that destroyed Hiroshima in Japan is estimated to have released about a thousand times as much energy in the fires than the explosive power of the weapon itself,” Dr Ruff said.

A well-recognised scenario that has been repeatedly examined by climate scientists is between India and Pakistan. With a serious risk of conflicts arising between the countries and both countries having policies of early deployment of nuclear weapons, it has now become clear that nuclear weapon use is seriously considered on both sides. 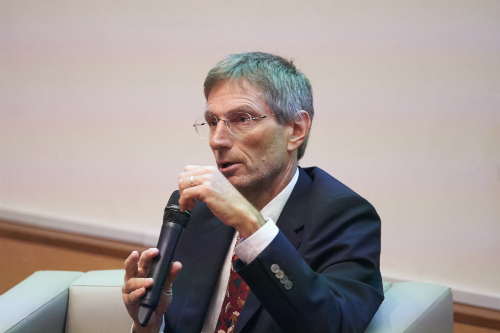 “The scenario involving 100 Hiroshima-sized weapons would have caused acute consequences. It would also produce 6 million tonnes of smoke. This constitutes less than 0.5% of global nuclear arsenals in weapons and in numbers, and less than 1/10 of 1% of relatively small weapons. By nuclear standards, this is a small war.

“But India and Pakistan are growing their arsenals faster than any other states in the world and with the increase in density of fuel and people, the current arsenals are estimated to not produce 6 million tonnes of smoke but 15 million tonnes.

“This scenario is a very understated estimate. Smoke generated by a nuclear conflict in South Asia would rapidly cover most inhabited regions on the planet and in a couple of weeks, it will pretty much be everywhere,” Dr Ruff revealed.

In such an event, the World Health Organisation (WHO) has made it clear that no health service anywhere on Earth or a combination of them would be up to responding in any adequate way to the aftermath of a single detonation over a city. Therefore the only logical approach is to prevent nuclear war from happening in the first place.

So how are we in relation to disarmament? The historic United Nations Treaty on the Prohibition of Nuclear Weapons was adopted on 7 July 2017 and provides the only currently defined path to the eradication of nuclear weapons.

The treaty provides a categorical and comprehensive prohibition of nuclear weapons and provides a pathway for all states, those with and without nuclear weapons, to fulfill their legal obligations to achieve nuclear disarmament. It de-legitimises nuclear weapons which have profound effects even on states that haven’t signed them.

The treaty will be enforced when 50 states have ratified it. There are currently 70 signatures and 23 ratifications.

This would not have happened without the support of civil society, particularly the support mobilised by The International Campaign to Abolish Nuclear Weapons (ICAN), which was awarded the Nobel Peace Prize in 2017 “for its work to draw attention to the catastrophic humanitarian consequences of any use of nuclear weapons and for its groundbreaking efforts to achieve a treaty-based prohibition of such weapons”.

“We wanted to establish a campaign coalition with a very clear goal for a treaty process to prohibit and provide for the elimination of nuclear weapons based not on political insecurity arguments but on the consequences. It was the right idea, at the right time and has grown into a substantial campaign. “Nuclear weapons are now on the way to the same stigmatised international illegal footing as other inhumane and indiscriminate weapons. As more states join in, it adds to the stigma to the weapons so they are less likely to be produced, used and deployed. With it also comes a badge of shame and this changes national behaviour.

“It is a very important statement of hope and capacity to deal with threat; the only bright spot in an otherwise increasingly bleak world of nuclear dangers. However, the treaty was the easy part. What we crucially need is leadership which we currently do not have from states that hold all of humanity and our good Earth at ransom with these heinous weapons, but we can change that,” Dr Ruff said.

To top it off, moral leadership is really important to try to accelerate the elimination of nuclear weapons. This can be seen from the Red Cross calling all states to join the treaty as well as faith leaders with Pope Francis being prominent among them – and we need more.

“Our existential dilemma can be summarised in this simple question: Will it be the end of nuclear weapons or the end of us? It will be one of those things and for everything that we hold dear and strive for, we all have a role to play to make absolutely sure the answer to this question is the right one,” Dr Ruff concluded.