The School of Pharmacy together with the Jeffrey Cheah School of Medicine and Health Sciences organised the Monash Health Care Team Challenge (HCTC), the first of its kind in Malaysia. 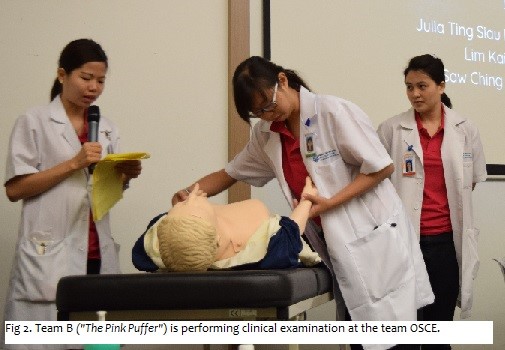 The School of Pharmacy together with the Jeffrey Cheah School of Medicine and Health Sciences organised the Monash Health Care Team Challenge (HCTC), the first of its kind in Malaysia, in February 2017.

Teams comprising of medical and pharmacy students from Monash Malaysia competed against each other over the course of three weeks.

In the first week, teams were given a complex clinical case, followed by the release of clinical test and laboratory investigational results in the second week. In the third week, teams were tasked to examine, diagnose and treat a simulated patient. The project culminated with a final collaborative presentation on comprehensive management plan for their patient.

“The Health Care Team ChallengeTM was first introduced in the University of British Columbia in Vancouver, Canada, 20 years ago. Since then, it has been adopted as an annual event in many parts of the world, including the UK, the US, Australia, and Japan. Bringing this to Malaysia for the very first time, we hope to provide an engaging learning environment for our pharmacy and medical students, to provide better patient care,” shared Benny Efendie, the project leader and lecturer at the School of Pharmacy.

Echoing similar sentiments, A/Prof Dr Amudha Kadirvelu, lecturer at the Jeffrey Cheah School of Medicine & Health Sciences shared that the activity is aimed at giving medical and pharmacy students the opportunity to learn with, from and about one another through an engaging and exciting competition-based learning method. 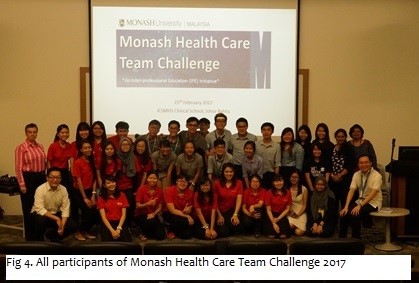 “The Monash HCTC was a good learning experience for us all. It helped develop my clinical reasoning through discussions with the medical students. I also learned how to rule out various differential diagnoses.” shared Lim Ee Jun, a fourth-year pharmacy student.

For Edward Tan, a fourth-year medical student, he shared that he learned to recognise the pharmacists’ roles in patient care. He said, “They are very good in screening of drug interactions and explaining to the patients on the use of medical devices, such as inhalers and insulin injection.”

The panel of judges were impressed with the students’ performance and their engagement as teams. After a tough battle, Pink Puffer emerged champions which won them a cool RM1,800 cash prize, followed by first runner-up, The Mystic (RM1,200 cash prize) and second runner-up, The Grey Matter (RM600 cash prize).