Monash University Malaysia is located in Bandar Sunway, Malaysia, about 20 kilometres from Kuala Lumpur while the Johor Bahru Clinical School is located in the southern Malaysian city of Johor Bahru.

You can also contact us by telephone or email.

Travel by taxi is cheap in Malaysia, especially if you are sharing a ride. For example, the taxi fare from the Monash campus to the Sunway Pyramid shopping mall is about RM5. Taxis elsewhere run by meter, with the rate starting from RM3.

Subang and the area known as USJ are alternative, nearby shopping and entertainment centres. You can access them by taxi or public buses, but you'll need to switch buses.

The Sunway Shuttle Bus Service is a fast, convenient and free way of getting around Bandar Sunway. It runs every 25 minutes (subject to traffic conditions) between 7 am and 11.30 pm hours daily. The shuttle operates at: 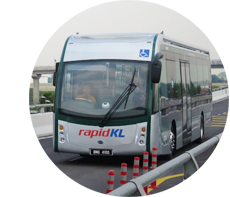 The Bus Rapid Transit (BRT) station is just outside our door, providing a convenient mode of transport around Sunway. The stations are listed below:

There are other public bus and light-rail networks that will get you in to and around nearby Kuala Lumpur. 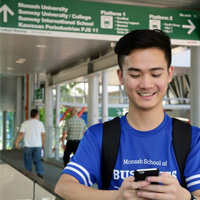 In and around Kuala Lumpur