Creating solutions for the ageing population 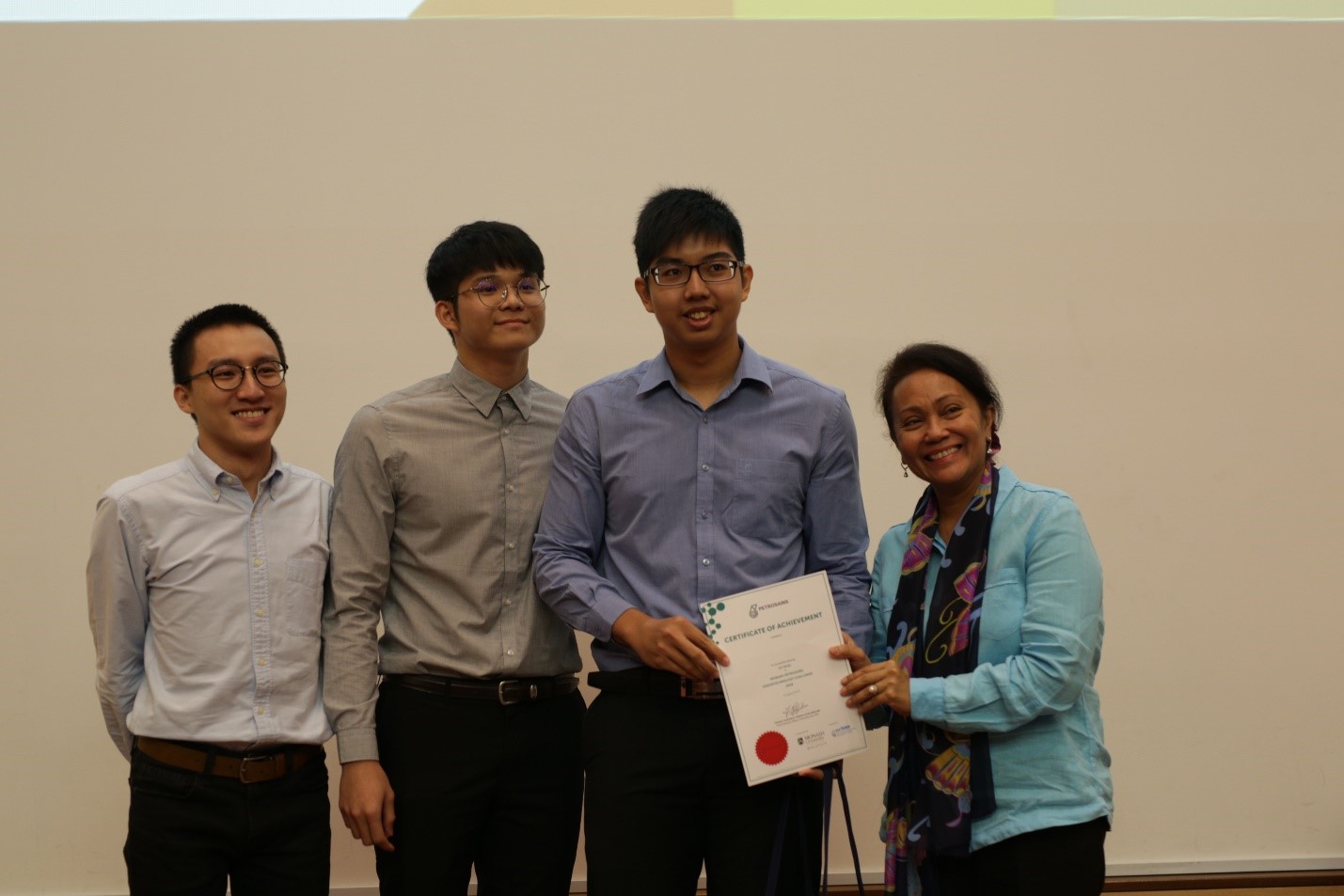 Monash University Malaysia’s Plenary Theatre was a hive of activity on 4 August 2018 as the seven finalists of the inaugural Gerontechnology Challenge 2018 geared up to present their ideas on how they could improve the lives of the older people in front of a panel of judges.

The challenge, which was held in partnership between Monash University Malaysia's Gerontechnology Laboratory and Petrosains, was open to those residing in Malaysia aged 13 (with adult supervision) and above, including submissions from individuals or teams of up to four.

Participants must propose a product idea, such as an app, wearable devices or assistive devices for older people within the following domains of human activity: Health and Self-Esteem; Housing and Daily Living; Mobility and Transport; Communication and Governance; and Work and Leisure.

Applications opened in March while semi-finalists were chosen in April. In May, participants attended a Design Thinking Workshop to meet up with mentors and experts for advice and ideas refinement on top of receiving a RM200 seed funding to work on their final product (e.g. low-fidelity prototype), which culminated in the grand finals in August.

In his opening address, Professor Mahendhiran Nair, Vice President (Research and Development), Monash University Malaysia highlighted that ageing is a major issue across the globe that needs to be addressed, while more work needs to be done in Malaysia, as well as the Asean and Asia Pacific region to help the ageing population integrate, assimilate, and contribute to the economy.

Prof Mahendhiran added that the challenge was about pushing the next generation of leaders to think about solutions and innovations to this problem, and perhaps come up with a new innovation that will transcend other developing countries.

Meanwhile, Yang Mulia Tengku Nasariah Tengku Syed Ibrahim, CEO, Petrosains highlighted that “no aspect of modern life is untouched by technology”, but noted that many of the older generations are not adopting technology into their lives.

“We cannot assume that it’s because they are technophobes or traditionalists. Majority of them are not, according to the current research,” she said, adding that many of today's products or services are targeted for specific demographics when they should be adopting Universal Design Principles, or designed for inclusivity, to enable people of all abilities to benefit from what is being offered.

“Many of us have also yet to fully explore the full potential of how products can be appropriated into our lives,” she said, adding that technology can help the older adults become more independent. Not wanting to leave anyone behind, she explained that Petrosains believes in igniting the passion for lifelong knowledge and hence, their partnership with Monash University Malaysia's Gerontechnology Laboratory to do more for the older people.

Team 'Drop the Stick's' prototype of an improved version of a walking stick, which had wheels and would be able to detect dangerous surfaces in addition to limiting the need for excessive hand movements required by a traditional walking stick, impressed the judges who awarded them the grand prize of RM5,000.

Based on their research, the team discovered that falling is the number one cause of accidental deaths among senior citizens while people who use walking aids are four times more likely to fall compared to those who did not use them. They noted that some of the common walking aid problems include the lifting portion and excessive arm movements, which is known to cause fatigue and increase the risk of falling.

Their smart predictive walking stick would learn the way the user walks, anticipate their movement and break at a perfect angle to allow maximum balance for the user, giving them full control.

'Team Ergonomers' came in second with their smart portable walking chair idea while 'Team 0 (1)' came in third place with their Gold Buddy app which functions as a data collection portal to make the lives of the older adults simpler. They each walked away with RM3,000 and RM1,000 respectively. All winners also received a certificate from Petrosains.

The event is chaired by Associate Professor Teh Pei Lee and supported by the Health and Well-Being cluster of the Global Asia in the 21st Century (GA21) Multidisciplinary Research Platform, the Malaysian Chapter of the Institute of Electrical and Electronics Engineers’ Technology and Engineering Management Society (TEMS).