Gearing up for the Fourth Industrial Revolution

The Fourth Industrial Revolution (4IR) is set to send ripples of change throughout the world, and will require both big and small businesses to innovate, to stay relevant and competitive in the global market or risk becoming defunct.

The 4IR refers to the shift towards digitalisation, as advancements in technology such as the Internet of Things (IoT), Artificial Intelligence (AI), and automation are poised to dramatically change the way we live our lives.

In light of this, the Monash Malaysia Business Alumni Chapter (MMBAC) recently organised Tech Things Seriously!, an interactive forum on the Fourth Industrial Revolution where professionals from various fields were brought in to shed light on the challenges and implications of digital and social disruption.

Moderating the session was Dr Dzaharudin Mansor, National Technology Officer (NTO), Microsoft Malaysia, who began the session by providing an overview on the 4IR. The Monash Australia alumnus extolled on the importance of technology and the internet, adding that it has the ability to cause numerous disruptions in our environment, such as the emergence of driverless cars, which utilises a combination of technologies.

Dr Dzaharudin added that it was important to democratise the internet, or to ensure that it not only remains affordable but usable to many or risk becoming “a country without roads”. 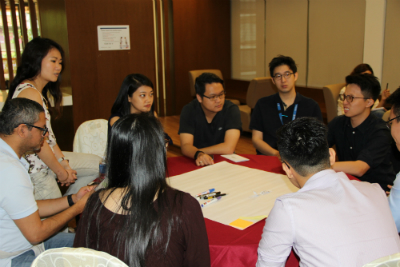 He also opined that the democratisation of technology can benefit SMEs, citing Uber and Grab as examples of companies that are disrupting the transportation industry, which has existed for many years.

“Think about Netflix, think about Spotify, and Airbnb. These are the early signs of companies (that are) coming from nowhere and disrupting traditional industries. I think you need to realise (that) it’s going to happen, it’s going to change and you need to embrace the change.”

Meanwhile, Johan highlighted that technology is changing rapidly and it is imperative business models change as required. Using Blackberry and Kodak as an example, Johan illustrated how companies can fall, if they fail to adapt. However, he cautioned that the 4IR is “never just about technology”, but also other dimensions, such as urbanisation and the country’s demographics.

While the country’s population growth is expected to grow in the coming years, Johan said the number of youths is expected to shrink due to declining birth rates. He also raised fears the country will fall by the wayside as it struggles to grapple with the pace of change, adding that Malaysia in general is underestimating the scale and speed of this change while there is a lot of "wait and see" approach in the private sector.

Meanwhile, Mah’s eye-opening session extolled the importance of data. As one of the first two qualified and certified satellite orbital analysts in Malaysia who was involved in planning, building, launching and operating Malaysia’s first and second satellites; Measat-1 and 2, Mah waxed lyrical about the rise of big data. 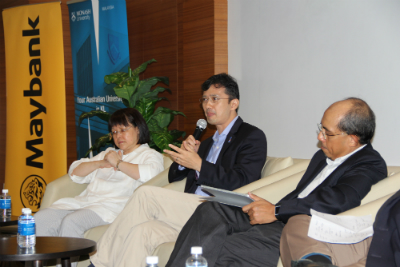 Picking up where Mah left off, Lau accentuated the importance of data from the standpoint of startups, using Google Analytics as an example of a free tool that enables companies to analyse their data towards making sound business decisions, without spending a fortune.

Shifting gears, Prof Mahendhiran said having a multidisciplinary skill set is important, citing towering figures such as Albert Einstein and Isaac Newton as examples of how it can benefit an individual, leading to their outstanding achievements. He added that training in universities need to be multidisciplinary as well, with many universities focusing too much on specialisation that they miss out on gearing students for “the breadth of knowing”.

The session concluded with a mini case study sponsored by Maybank which was aimed at helping participants put into practice what they had learned from the forum. Participants were grouped and given a problem statement to solve before presenting their work.

The event proved to be insightful for its participants, who comprised of Monash alumni as well as members of the public. Tan Yinn Wayne explained that he gained a deeper understanding about what the 4IR was all about, and where the country was headed. The 23-year-old accounts and marketing graduate added that it was heartening to note that evolution is taking place in businesses, and on the importance for one to upgrade themselves with new skills to cope with the changes taking place in the world.