Putting skills and wits to test

Palpable excitement was in the air as 20 teams from 13 colleges and schools, comprising 80 students, converged at Monash on 23 July 2016 for the Monash Science Triathlon 2016.

“Thank you all for coming, we are really excited to see everyone getting into the thick of things, and how you all will perform. Monash is special as it’s one of the top 100 universities in the world. We hope to welcome you here in the future,” Associate Professor Dr Catherine Yule  from the School of Science welcomed the students. 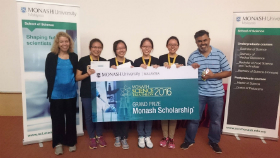 Champions of the Monash Science Triathlon 2016

Organised by the School of Science at Monash Malaysia, students were grouped into teams of four, to tackle three different sessions - biology and genetics, analytical chemistry, and food science and technology. All experiments were conducted safely within the walls of the science laboratories, overseen  by academics and Monash students.

Session One consisted of three parts - identifying the respective mitotic stages in onion root-tip cells, 100 multiple choice questions (MCQ), and a case study, where students had to analyse and decide which of the evidences presented by a forensic botanist was the most convincing. Teams were given  90 minutes to complete this session. 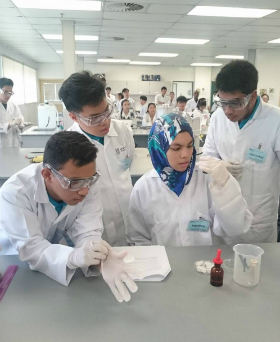 Session Two involved food science and technology, and teams had to answer a MCQ as well as solve three case-study questions that were food related. The final session saw teams trying to identify an unknown based on a standard curve graph they were asked to create based on the different concentrations  prepared.

Gan Mee San, Chong Hui Yuan, Low Mian Ying and Low Mian Dee from Taylor’s College Subang Jaya Campus screamed with joy when their team was announced as the Grand Champion of the 2016 Monash Science Triathlon competition. All three students were awarded a 35% scholarship for a School of Science  undergraduate degree at the university. Accompanying lecturer, Pathmanathan Nadeson, attributed the outstanding win to the concerted effort of the college’s dedicated teachers and its excellent students.