Envisioning the future with today’s technology

Imagine a process that allows you to envision and create an entire futuristic reality, built on actual research that is present in the here and now. Such a process exists, and is called Science Fiction Prototyping, a mechanism that takes current research ideas and imagines their effect and application in the future. 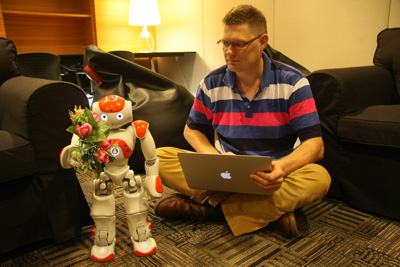 Dr. Simon Egerton - School of IT

“Science Fiction Prototyping is a process that gets you to think creatively and deeply into what your research can potentially lead to, we can actually build a reality into our research ideas,” said Dr Simon Egerton, the Deputy Head of School (Research) at the School of Information Technology in Monash University Sunway Campus.

“If a fictional prototype of your research can achieve things 10 years into the future, then we can feed the outcomes of that prototype back into the research we’re doing in the labs today,” he said.

Science Fiction Prototypes have a particular format, which are a beginning, outlining the present day research ideas behind the prototype, a middle, the prototype itself which is a science fiction story that projects the outcomes of the research into a future reality, and an end, which reflects on the prototype, its outcomes and feeds back ideas into the research, said Dr. Egerton, who also leads the Intelligent Systems Research Strength at Monash University.

The process of creating this prototype often brings together people from many different and diverse disciplines.

“People who wouldn’t traditionally be in the same room talking about the same project and working together, are now doing that. It’s just a great tool for brain storming ideas and building fictional characters and having dialogue with each other to build these prototypes,” said Dr. Egerton.

He said that the process was very different from conventional research methods, where scientists rarely get a chance to exercise their imaginations.

“It’s quite simply a mechanism that allows scientists to think creatively, and to allow creative people to think scientifically.”

Apart from the creative avenue that Science Fiction Prototyping gives researchers, it’s also a process that allows the masses to relate to the latest technology and research ideas.

“It is in the story bit, the middle, where the hard science can be really communicated to every day people,” said Dr Egerton.

“This is a very useful tool because when you read the stories, you don’t realise you’re reading and digesting complex research ideas.

“In a nutshell, these Science Fiction Prototypes are a very useful mechanism for communicating research ideas and potential outcomes in a format that everyone can understand and everyone is comfortable with.

“It’s a format that can stimulate curiosity, ideas, and stimulate people to think twice about some of the implications raised in the stories,” he said.

In September, Dr. Egerton and his team will be launching a book called “21st Century Robot: The Dr. Simon Egerton Stories” featuring his latest Science Fiction Prototype in the form of a robot named “Jimmy”.

“Jimmy is one example of a Science Fiction Prototype going full circle.

“The idea is you have your research in the here and now, then you develop a Science Fiction Prototype to imagine what your research would look like in the future, and then use the results of that process to feed back into your research, so that’s the complete design cycle,” he said.

The “21st Century Robot” is a book that can be purchased with the robot Jimmy. Jimmy will come with artificial intelligence and a framework that will enable the purchaser to start developing their own ideas with the robot, or take ideas from the book and try to work with those ideas.

“We’re currently designing and building this for release in September. All these opportunities, all these possibilities came about due to Science Fiction Prototyping.

“It got me to think of my research in ways I never really thought of before,” said Dr. Egerton, who is co-founder and director of the Creative Science Foundation, a charity dedicated to exploring the use of science fiction as a means to motivate and direct research into new technologies.

Dr. Egerton, whose area of research is in artificial intelligence -- specifically “building robots who behave irrationally” -- said Science Fiction Prototyping could also be successfully applied to any area, not merely science.

“They can be applied to a business, in the classroom in schools, and in pretty much any discipline.

“You can imagine a company working on developing a new product or developing a new direction for their business and they want to explore how this will affect them.  So they can develop a Science Fiction Prototype to help them imagine that future, and communicate that future to a wide range of stakeholders and through that process, they can bring reflections back into the design process or their business plan in the here and now.  So it’s not just limited to scientists, it’s really for all industries,” he said.

While the idea of using a prototype for non-science related industries is still new, Dr. Egerton said the message was currently being spread and said that holding workshops in schools, companies and universities could further educate the public on this new process.

“Science Fiction Prototyping workshops are a great way for schools to start engaging in future technology.  This stimulates students to think about leading edge technology today, and use their imagination about their future,” he said.

At Monash University, Dr. Egerton said he is working on developing a Science Fiction Prototyping unit for Monash students in the near future.

“Students here are exposed to my work and Science Fiction Prototyping but haven’t had a formal opportunity to use it themselves in their research or undergraduate studies,

“The way to really bring it to the students will be to have a multi-disciplinary unit based on these ideas, and we will be seeing that soon,” he said.

Dr. Egerton is keen to spread the ideas and is interested to talk to anyone from education or business who would like to explore applying Science Fiction Prototypes to their own area of interest.  He can be reached by email at Simon.Egerton@monash.edu.